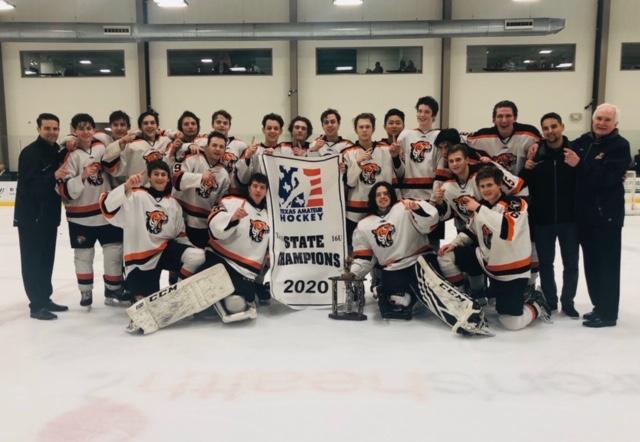 All Great Things Come to an End: A Tribute to Texas Tigers 16U AA

This is a series of stories that will be updated with a new story every day or two paying tribute to players, coaches or teams that unexpectedly had their seasons cut short as a result of the coronavirus outbreak.

The Texas Tigers 16U AA hockey team finally got over the hump a few weeks back, capturing the Texas state championship and leapfrogging the Ashburn Xtreme to take over the top spot in our United States Tier 2 rankings.

They were pumped up for their trip to USA Hockey Nationals and a possible No. 1 vs. No. 2 showdown against Ashburn to decide once and for all which team was the true national champion.

Then it all came to a screeching halt.

On March 11 USA Hockey announced that Nationals would be cancelled because of the coronavirus outbreak, effectively bringing an end to the Tigers’ national-championship dreams. They would finish the season a remarkable 59-4-1 and in the midst of a 26-game winning streak.

“We won a lot of games, which is great, but the reason we were playing was to win Nationals this year,” forward Brendan Hill said. “We played all of the games and tournaments as part of the process to get to the end goal of winning Nationals. It’s disappointing that the thing I cared about most – Nationals – did not happen.”

Texas’ last loss came way back on Dec. 8, a 3-2 shootout decision against the No. 40 Phoenix Jr. Coyotes. Their lone tie on the season was a 5-5 deadlock against the AAA Janesville Jets Nov. 1. Their other three losses came against AAA teams, and the Tigers recorded more than 10 victories against Tier 1 opponents.

During the 26-game winning streak Texas never allowed more than two goals. Tiger netminders recorded 11 shutouts during that span, while allowing just one tally on 11 occasions. For the year, the Tigers outscored their opponents, 320-70, allowing just 1.09 goals per game.

“Nationals being cancelled was obviously disappointing,” coach Erik Jansen said. “This season was about the journey and the process. Sometimes tough times are what make us who we are – stronger and better. This is a special group of players and families.”

Playing for a different organization, the Dallas Junior Hockey Association, the group was not able to qualify for the 14U state tournament when they were 13, but the following year they went 57-13-0 and captured the Texas Tier 2 championship. They ended that season ranked fourth in the nation after falling to the Palmyra Black Knights in the quarterfinals at USA Hockey Nationals in Buffalo.

Despite not qualifying for the state tournament as 15-year-olds, the team received a bid to nationals as the host team and managed to earn a bronze medal in the 2A division after falling to the eventual tournament runners-up. That year they ended up with a 26-26-2 record, more losing than most of them were accustomed to, which fueled their desire to return to Nationals and capture that elusive national title this year.

Prior to the season, almost the entire group moved to the Texas Tigers’ organization to continue working with their longtime coaches, Director of Hockey Mike Salekin, Erik Jansen and Mike Kelly – as well as Niko Jansen – and to join some other strong 2003 birth years they had competed against in the past. They weren’t even sure who their goalies would be until right before the season, but given the team’s 1.09 GAA they obviously did pretty well in that area.

“I felt like this was the best season of hockey ever,” forward Austin Thurman said. “We played good and had a great season, but I also had some of the greatest teammates I’ve ever had. The boys were always kind and caring about one another. We played hard and pushed each other, but also laughed and had a lot of fun. All of our coaches were focused on making us the best team possible, but they truly cared about us as young men and not just hockey players.”

The Tigers dominated the Dallas Stars Travel Hockey League by going 20-1 and outscoring their opponents, 108-12, to capture the DSTHL championship before winning the state crown. They won three other tournaments during the year and defeated several AAA clubs at the CCM World Invitational in Chicago.

Sometimes a cohesive group that has played and fought for something for a long time still needs that one intangible to help put it over the top. Already a strong and highly successful team, Texas added forward Colton Crawford to its lineup in December.

Colton had played with many of the players on the team for several years before moving up to the Tier 1 level at age 15. Colton’s uncle, Randy Cox, had been the team videographer for many years before suffering a heart attack that killed him in December 2017.

Randy’s passing, just before a tournament in Nashville, brought the team closer together, and the players wore “RC” stickers on their helmets for the rest of their season, the first in which they won the state championship and advanced to Nationals.

Colton suffered a severe injury to his spleen playing at the 16U AAA level early this season. Doctors weren’t sure if he would be able to come back this year and worried that he might not be able to play at all – ever.

His Tier 1 team replaced him, and Colton spent countless hours in the hospital recovering. He lost weight and strength as he had to rest and let his body heal. Doctors finally released him to resume physical activity, and Colton had to decide if he wanted to return to hockey. The Tigers had a spot available, and he jumped at the opportunity to play with his old buddies and compete for a national championship.

The recovery process was long and challenging for Colton, but he seemed to be hitting his stride in the state tournament, recording a hat trick and an assist in one of the round-robin victories. With many of the players still wearing the “RC” stickers on their helmets, the Tigers were primed to return to Nationals with Colton and win it for Uncle Randy.

But they never got the chance.

“I’ve known this group of guys for years, and they are a really skilled team,” Colton said. “After my injury they gave me a place to recover and see if I could recover in time to contribute to the team before the season ended. I guess the thing I’d remember best about this team is how great an accepting they were of me when I needed it most. It was so disappointing and sad {not to go to Nationals}. All that work is left unfinished.”

Unfinished, but not unnoticed.

Congratulations to the Texas Tigers on an incredible season and best of luck in the future!