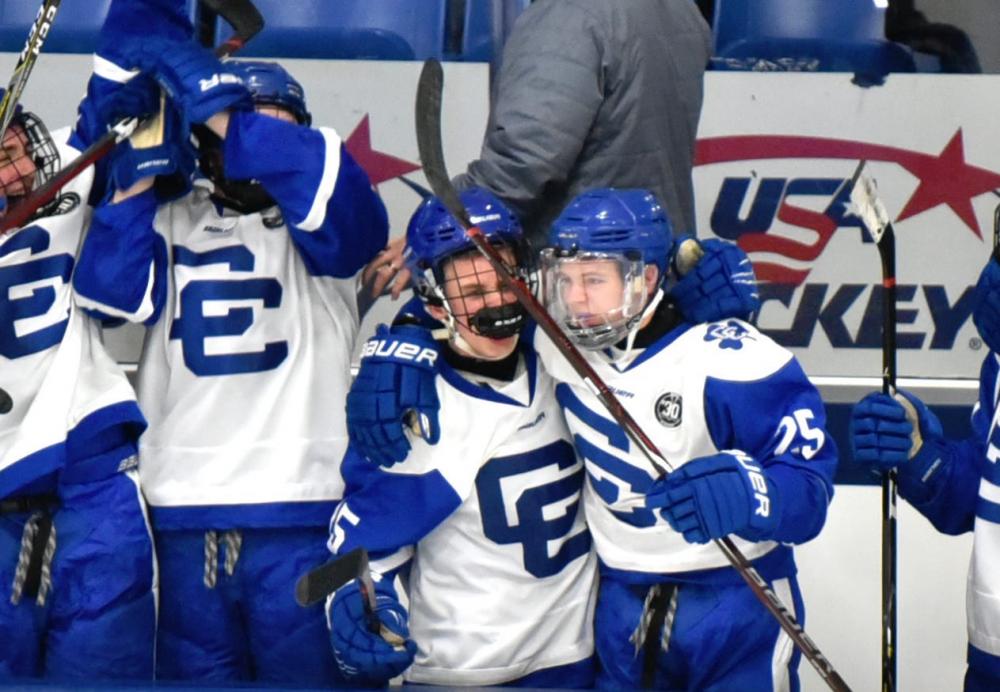 Here are your Week 21 top matchups:

We’re going to go in a little different direction this week with our first game. We don’t really promote too many high school games as games of the week, but there’s a huge one in Michigan this weekend, so we will start there.

The top two high school teams according to MHR in the state of Michigan face off in this battle of the top Michigan Division 1 team (Detroit Catholic Central) and the No. 1 Division 2 team (Livonia Stevenson). This is a matchup that Michigan High School Hockey Hub is calling “the game of the year,” with Catholic Central coming in with 16-5-0 overall record and Stevenson at 20-1-1. DCC has won eight straight games dating to a 2-1 loss to No. 3 Brother Rice Jan. 22. That was DCC’s second loss of the year to Brother Rice, with other losses coming against Culver Academies Prep (twice), ranked 29th nationally among 18U AAA teams, and No. 6 Grosse Point South. DCC is 16-2 in its last 18 contests. Stevenson’s lone loss came in its season opener, a 5-2 decision against Lake Forest Academy Prep, the No. 8 USA Independent Prep team. Since then Stevenson has gone 20-0-1, with the tie coming against Brother Rice Nov. 30. Stevenson has outscored its opponents, 110-32, while DCC holds a margin of 95-33 over its foes. DCC has wins against the top-ranked teams in Ohio and Wisconsin as well as vs. Michigan’s third- and fifth-ranked programs. Stevenson has beaten Michigan Nos. 4, 5, 8 and 9.

CLICK HERE for a look at the individual player matchups on Michigan High School Hockey Hub.

Philadelphia Jr. Flyers 16U is one of the hottest teams in the United States, having won 31-straight games to climb toward the middle of the top 10 with an overall record of 50-6-2. Philly’s last loss was a 3-2 decision against the Regina Rebels, Canada’s second-ranked team, Oct. 25. During the 21-game run, the Jr. Flyers have surrendered more than three goals only once while recording 15 shutouts and holding 11 opponents to just one goal. They notched seven-consecutive shutouts at one point during the streak. Philadelphia was 7-4 through its first 11 games, but is 43-2-2 since. The Jr. Flyers have outscored their opponents, 235-60. Belle Tire is 29-19-8 overall, but 9-1-2 in its last 12 outings. They dropped their most recent outing, 5-3, to third-ranked Little Caesar’s Feb. 9. Belle Tire went 1-0-1 in a pair of games against the top-ranked Chicago Mission Feb. 1. They also knocked off No. 3 Little Caesar’s Jan. 15. BT has outscored its opponents, 144-66, and dropped its only meeting against the Jr. Flyers, 2-1, way back on Aug. 31.

The first- and fourth-place teams in the CSSHL face off when the Northern Alberta X-treme, ranked second overall in Canada and Western Canada, takes on the Calgary Edge School, No. 8 in Western Canada and No. 14 in the nation. NAX leads the CSSHL Midget Prep Division at 28-3-1 in league play, while Edge is 18-8-0-3. The X-Treme have 86 points, 10 more than the second-place Burnaby Winter Academy. Edge School has 57 points, four fewer than third-place Rink Academy. Including this weekend, Edge has six games left – including three with Rink – so there is plenty of opportunity to move up into third place. These two teams have met three times, with NAX earning a one-goal victory each time – 4-3, 4-3 and 5-4. The most recent contest was the 5-4 game on Jan. 18. The X-Treme have won eight of their last nine games, with the loss coming against Delta Hockey Academy, 6-4, Feb. 7. NAX was unbeaten in its previous 18 games before going 8-2-0 in the last 10. Overall, the X-treme are 31-3-1 and have outscored their opponents, 194-78. Edge has won four of Its last five games, losing to USA No. 1 Shattuck-St. Mary’s, 3-0, Feb. 1. In the last three contests, Edge has outscored its opponents, 29-3, including a pair of shutouts. Logan Lorenz leads Northern Alberta with 22 goals and 43 assists for 65 points in 29 games. Riger Lorenz paces Edge with 33-31-64 in 28 contests.

The AFHL;s second- and third-place teams meet with five points separating them. Second-place Edmonton is 14-8-2 and has 44 points, while Rocky Mountain is 13-8-3. The two teams have met six times this season, with Rocky Mountain holding a 3-2-1 advantage. Overall, the Pandas are 28-14-1 and have outscored their opponents, 107-58. Rocky Mountain is 19-17-1 and owns an 84-66 scoring edge over its opponents. These teams last met on Feb. 9, with the Pandas skating to a 3-1 victory. That was Rocky Mountain’s second-consecutive loss, but prior to that the Raiders had won three of their previous four outings all by shutout. They are 7-3 in their last 10 games. Including last weekend’s win against Rocky Mountain, Edmonton has won eight straight dating to a 2-1 loss to Rocky Mountain Jan. 24. That game marked the last of four-straight losses for the Pandas. The Raiders’ Kaia Borbandy leads the AFHL in assists with 13 and is tied for the scoring lead with 20 points. Her teammate, Sydney Benko, also has 20 points on 11-9-20. They are tied with Jenna Goodwin of the St. Albert Slash. For Edmonton, Jacquelyn Fleming leads the league with five power-play goals and has 8-2-10 overall. Sage Taylor leads the team with 7-9-16.

It’s a playoff battle of the GTHL’s fourth- and fifth-place teams as Ontario’s No. 6 Toronto Marlboros take on the 10th-ranked Mississauga Senators. The Marlboros closed the season with 45 points (19-7-7), while the Senators had 41 (18-10-5). This will be game four of a five-game series, with the Marlboros owning a 2-1 lead. Mississauga eared a 2-1 victory Feb. 9, with Toronto winning, 5-3, Feb. 11 and 2-1 Feb. 14. The Marlboros ended the season tied for third in points with the Toronto Titans, but had one fewer win, and were one point behind the second-place Toronto Nationals. The Nationals lead the seventh-place Mississauga Reps two games to none, while the Titans and sixth-place Vaughan Kings are tied at one game apiece. The Marlboros bring a 29-14-10 record into Game 3 and have won six of their last seven contests. For the year they have outscored their opponents, 151-99. Mississauga is 29-16-6 overall with a 137-102 scoring advantage over its foes. The Sens are 9-4-1 in their past 15 contests. Yoan Loshing leads the Senators with 24 goals and 12 assists in 28 GTHL games. Paul Ludwinski paces the Marlboros offense with 13-17-30.