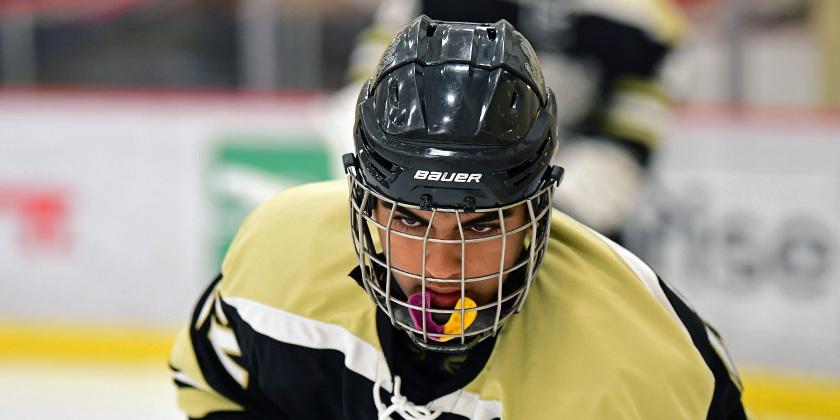 Here are your Week 20 top matchups:

Since we’ve been focusing on younger age groups the past several weeks, this week we look to the HPHL Playoffs for a couple of the top 15U and 16U matchups. Two great games are previewed below, but you can CLICK HERE to see the schedule and standings for all age groups. Age-group tabs can be found at the bottom of that page. Thanks to our partner, GameSheet, Inc. for providing the scoring and standings for this weekend’s playoffs.

No. 13 Compuware and No. 14 Team Illinois meet on the second day of the tournament, with TI having gone 1-1 after falling, 3-0, to the No. 17 Chicago Mission and knocking off the No. 58 Chicago Young Americans, 4-0. Compuware is 2-0, with wins coming against the No. 5 Oakland Jr. Grizzlies (5-0) and 16th-ranked Honeybaked (4-2) This is the third meeting of the two teams this season. They split a pair of 5-2 decisions, with Compuware winning Nov. 24 and TI earning the victory Dec. 7. Compuware entered the weekend with an overall record of 33-17-2 and finished league season at 8-6-1, while TI actually tied for the HPHL’s top mark at 11-6-0. TI brought an overall record of 36-15-1 into the playoffs and had outscored its opponents 187-128. Compuware held a 196-151 scoring advantage over its foes. Including its tournament wins, Compuware has won three straight and seven of its last eight contests. TI is 12-1 in its last 13 outings.

It’s a second-day matchup of HPHL 15U giants as top-ranked Honeybaked takes on the No. 6 Jr. Grizzlies in Michigan. Honeybaked defeated Team Illinois and the Chicago Young Americans by identical 6-0 scores in opening-day action, while the Jr. Grizzlies knocked off No. 2 Compuware in a 6-5 thriller and beat the Chicago Mission, 3-0. Honeybaked entered the tournament as the top seed with a 12-2-0 regular-season HPHL record, while the Jr. Grizzlies finished the regular season fourth at 7-7-0. Honeybaked entered the tournament with remarkable 52-2-2 record, the only losses coming against Compuware in September (6-2) and November (5-4). Honeybaked is unbeaten in its last 34 games since that second setback (31-0-3). These two teams have met four times. Honebaked has won each contest, including a thrilling 6-5 OT decision the last time the teams met Dec. 29. Honeybaked has outscored its opponents, 361-93, compared to Oakland’s 267-126 scoring advantage. The Jr. Grizzlies are 45-13-2 overall and have won 11 straight contests. They are 18-3 in their last 21 games.

It’s the final weekend of the regular season in the ETA as the first- and third-place teams jockey for playoff positioning. Peterborough brings a 27-4-2 league mark into the final regular-season weekend, good for 56 points and a five-point advantage over sixth-ranked Ajax-Pickering. Kingston is tied for fourth with Whitby at 18-11-5 (41 points), but has one fewer loss. The Petes hold a 2-0 advantage over the Gaels in this year’s season series, including a 2-0 victory Nov. 23 and a 5-2 win Oct. 27. Peterborough is 38-7-3 overall and ranked 10th in Canada. The Petes dropped their last outing, 2-1, against the Markham Waxers Feb. 4 and have lost two of their last three. They are 4-3-1 in their last eight contests. Kingston is 27-13-5 overall. The Gaels split a pair of games against the York Simcoe Express last weekend and are 2-5-1 in their last eight following a seven-game winning streak. Derek Hamilton leads Kingston in league scoring with 37 goals and 18 assists in 33 games. Peterborough is led by William Everson, who has 24-24-48.

With three weeks of play remaining in the PWHL regular season, the third-place Ice Wolves and No. 12 Barracudas face off in hopes of moving up in the standings. Kingston is 20-7-2 in league play and with 45 points finds itself a point behind second-place and No. 11 Stoney Creek. The Ice Wolves are eight points behind first-place and second-ranked Etobicoke. Burlington is 16-11-4-0 in PWHL play, one point behind Cambridge and Mississauga and three behind fifth-place Oakville (39 points). This will be the second meeting of these two teams, with Burlington having earned a 3-1 victory November 29. Kingston is 25-12-6 overall, but has dropped its last two decisions and is 4-4-3 in its last 11 contests. The Barracudas have won four of their last five, but are 4-4 in their last eight outings. Before those eight tames they had been unbeaten in their previous nine (7-0-2). Kingston’s Kiara Zanon leads the PWHL in scoring with 56 points on 28 goals and 28 assists. She tops the league in goals and assists, too. Leah MacSween paces the Barracudas with 12-13-25.

Shattuck and CYA meet for the fourth time this year, with SSM holding a 3-0 advantage in the season series. Their most recent meeting on Dec. 14 was a defensive struggle, with SSM holding off CYA by a 1-0 margin. Shattuck won the previous meetings by scores of 5-0 and 5-2 in November. SSM brings a record of 35-4-0 into the weekend series and a No. 1 national ranking in the MHR Independent Girls Prep rakings to go along with the 19U No. 2 ranking. They have won their last nine games, recording five shutouts and outscoring their opponents, 51-6, during that stretch. The first four games of the nine-game streak were shutouts. For the year, Shattuck has outscored its opponents by a 202-73 margin. SSM is gearing up for yet another run at a 19U national championship as they have won three of the past four titles, finishing second to the Boston Jr. Eagles – currently ranked third – last year. Three SSM players – Lacey Eden, Makenna Webster and Clara Van Wieren – recently won gold medals with the U.S. National team at the 18U Women’s World Championship. CYA is 26-27-6 overall and swept the Madison Capitols in its last two outings. They are 4-1-1 in their last six games but 4-5-1 in their past 10 outings.

Looking Ahead to Next Year? Do Your Homework to Maximize the Odds