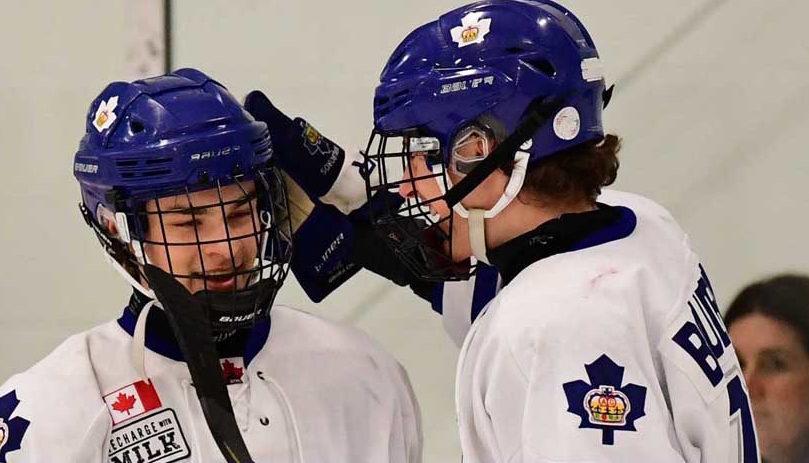 Here are your Week 17 top matchups:

A huge January tilt in the GTHL as the fourth-place Marlboros and first-place Jr. Canadiens face off. The Jr. Canadiens are 23-2-2 in league play with 48 points, which put them 11 points in front of the Marlboros (15-7-7). The Marlboros are two points behind the Toronto Titans (17-6-5). Despite their league standing, the Marlboros find themselves ranked second in Ontario and Canada with an overall record of 47-9-5, while the Jr. Canadiens are third in the province and nation at 40-7-7. In another twist, the teams have met four times, with the Jr. Canadiens having won three of those meetings by scores of 4-0 and 2-1 in September and 5-3 in late October. The Marlboros won the most contest, 4-3, Nov. 17. They enter the contest having won 10 of their past 11 games, with the only loss coming against USA No. 1 Chicago Mission by a 4-1 margin Jan. 12. They also fell to Canada’s top-ranked London Jr. Knights, 9-4, Dec. 30 before their most recent string of success. The Marlboros are a red-hot 32-2-2 in their last 36 outings. On the other hand, the Jr. Canadiens are winless in their past four contests, but three of those games ended in ties against the No. 5 Mississauga Senators, No. 32 Mississauga Reps and No. 11 Toronto Nationals. They have struggled a bit of late, going 2-4-3 in their last nine outings. The latest slide comes on the heels of a strong 10-1-1 stretch.

Two of the USA’s top 2007 PeeWee teams meet at two great Boston-area venues this weekend as the Rangers and Eagles collide. Saturday morning’s game will be played at the Conte Forum on the campus of NCAA hockey-power Boston College, while the afternoon tilt will take place at Warrior Arena, the practice home of the Boston Bruins. Mid-Fairfield, out of Norwalk, Conn., enters the weekend at 28-12-3 overall. The Rangers have won five of their past six games and nine out of their last 10. Boston is 22-10-9 overall and on a seven-game unbeaten streak (4-0-3). The Eagles have recorded wins in their last four contests after tying the three previous outings by the same 2-2 score, and they are 7-1-4 in their last 12. These two teams met previously on Sept. 27, with the Eagles coming out on top by a 4-3 margin. Boston also won, 5-3, on Sept. 16, with the teams skating to a 2-all tie that same day in Connecticut. The Eagles have played the top-ranked Middlesex Islanders four times to date, going 0-3-1, and dropped a tight 4-3 decision to No. 2 Chicago Mission. Mid-Fairfield also has dropped all three of its games against the nation’s No. 1 team, but owns a 2-1 victory over the No. 2 Chicago Mission and a 5-2 win over the fourth-ranked L.A. Jr. Kings.

Many of the nation’s top 12U girls’ teams descend on the Tampa area this weekend for the Mrs. Invitational, with the Spitfires and Little Caesar’s facing off in one of the top games of preliminary-round play. This will be the first meeting of these two teams this season. Massachusetts brings a 33-2-3 record into the contest, having lost only to the No. 5 East Coast Wizards by identical 3-1 scores Jan. 5 and Dec. 1. Prior to the Dec. 1 loss, the Spitfires had opened the season by going unbeaten in its their first 30 games. Massachusetts earned victories in its other four meetings with the fifth-ranked Wizards and owns two ties and a victory against No. 4 Assabet Valley as well as a victory against Canada’s No. 14 team, the Oakville Hornets. They have outscored their opponents by an astonishing 168-28 margin. Little Caesar’s is 27-11-1 and has won four of its last five outings entering the weekend, having fallen to the Trenton Jr. Trojans, 3-2, Dec. 22. After a long layoff holiday layoff of more than two weeks, they came back to knock off No. 31 Belle Tire, 4-0, Jan. 7. Their two losses prior to the Trenton setback were against the second-ranked L.A. Lions, 5-0, Dec. 8 and the top-ranked Chicago Mission, 2-0, Dec. 7. They are 11-3 in their last 14 outings and have beaten the No. 7 and 8 teams in the U.S. as well as the 13th-ranked Canadian team. Little Caesar’s has outscored its opponents, 132-82.

It’s a battle of Lower Lakes Female Hockey League West Division contenders as first-place Stoney Creek travels to London to take on the third-place Devillettes. Stoney Creek is 17-1-1 in league play, while the Devillettes are 11-5-3. These two teams have met five times, with the Sabres having won four of those contests by scores of 5-2 (twice), 4-3, and 2-0. London’s lone victory was a 3-1 decision Oct. 18. Their last meeting resulted in a 2-0 Stoney Creek victory Nov. 10. Stoney Creek is 27-9-4 overall and has outscored its opponents, 150-53. The Sabres dropped their most recent outing, 3-0, against the USA’s top-ranked Chicago Mission. Prior to that they lost to the top Canadian team, the Peterborough Ice Kats, 3-2. Stoney Creek has lost three of its last four games, including a pair of setbacks against the Mission, but had put together a seven-game unbeaten streak prior to that. London is 23-12-4 overall and has outscored its opponents, 105-64. The Devillettes enter the contest on a four-game winning streak, and they are unbeaten in 11 of their last 12 outings (8-1-2). They were victorious in their last outing, 3-0, against the No. 9 Barrie Sharks.