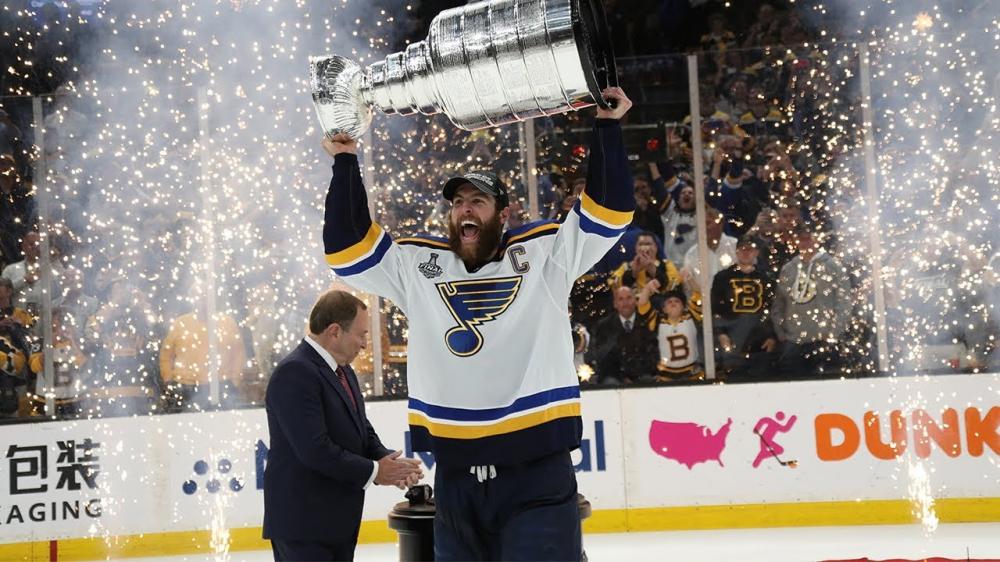 Hockey New Year! A Different Look Back at 2019 on the Ice

What an amazing year for hockey 2019 was!

But don’t we say that every year? Probably.

That’s what happens when you have, bigger, stronger, faster and more skilled players coming on the scene at the highest levels of the men’s and women’s game every season – and younger players looking up to and emulating the superstars in hopes of taking their place sometime in the not-too-distant future.

We’ve already documented in this space all the exciting things that happened in women’s hockey in 2019 with the formation of the Professional Women’s Hockey Players Association and that organization’s commitment to providing a viable professional league and securing the future of the sport for all the young girls looking to follow in their heroes’ footsteps.

But what about Kendall Coyne Schofield?

We weren’t too far into 2019 when she took an injured Nathan MacKinnon’s spot in the Fastest Skater Competition at the NHL’s All-Star Weekend and finished with a better time than three of the 2018 participants and one of the 2019 entrants. Her time was less than a second behind the 2019 winner.

Those were all adult males she was competing against by the way. Adult male hockey players. Adult male professional hockey players. It was an amazing performance under an incredible amount of scrutiny on a huge stage that provided the women’s game with the notoriety it deserves and usually only gets during an Olympic year.

Her showing set the stage for what would come later in 2019 when the PWHPA put together a barnstorming tour that showcased the top women’s hockey players in the world and brought them closer to their young fans while making major strides toward establishing a viable professional league.

If you make one hockey-related New Year’s resolution, it should be to get out to see these world-class athletes play in a Rivalry Series game or at one of their remaining Dream Gap Tour stops. If that’s not possible, make the time to see a local NCAA Division I or Division III game or even an ACHA college contest.

The women’s game is pure, fast, competitive and highly entertaining. And the future is bright after a tremendous 2019.

That wasn’t all that happened in the year that just passed us by of course. Since we’re on the subject of women’s hockey, congratulations to the University of Wisconsin, which defeated Minnesota to capture the NCAA Women’s Division I title and Plattsburgh State, which knocked off Hamline to earn its fifth championship in the last six seasons. On the world stage, the United States captured its fifth consecutive women’s world championship.

The hockey community kicks off every year with what has become a holiday tradition all across North America, the World Junior Championship. While we still expect a United States-Canada final pretty much every year in this under-20 tournament that features the next generation of NHL superstars, that just isn’t a given anymore.

Finland knocked off the U.S. in the championship game on a late goal by Kaapo Kakko less than a week into 2019 to earn its third gold medal of the decade, with Canada turning in a disappointing sixth-place finish on friendly ice in Vancouver. Still considered an “upset,” Finland’s gold medal set the stage for another remarkable story at the game’s highest level.

On January 3, the St Louis Blues found themselves in the basement of the NHL’s Central Division – no make that the basement of the entire NHL – looking up at every other team with a record of 15-18-4. Four days later, rookie netminder Jordan Binnington would make his first NHL start and become the 35th goalie in NHL history to record a shutout in his debut with a 25-save effort in Philadelphia against the Flyers.

At some point during a postgame team gathering in the City of Brotherly love, a DJ decided to play the 80s hit “Gloria,” and from that point on the Blues rolled to the best record in the NHL over the season’s final three-plus months. After that the team and its fans sang Gloria 16 more times after playoff victories (it really may have been 1,600 more times) that carried the Blues into the month of June and culminated with captain Alex Pietrangelo becoming the first St. Louis player ever to hoist the Stanley Cup.

For the second straight year we had a first-time Stanley Cup winner, and if people in the Washington, D.C. area thought their Capitals winning Lord Stanley’s chalice in 2018 was a miracle, what the Blues pulled off truly defied reality.

St. Louis ended the regular season on a sizzling 30-10-5 run, including a 12-2-1 February mark that featured a club-record 11-game winning streak, and became the first North American professional team to be in last place after more than a quarter of the regular season and rally to win a championship.

The Blues posted a remarkable 56-19-11 record in the 2019 calendar year, with Binnington setting a team record for victories by a rookie goalie and becoming the first rookie tender in NHL history to earn all 16 of his team’s postseason victories en route to the Stanley Cup. Ryan O’Reilly got to take home the individual hardware, earning the Conn Smythe Trophy as the playoff MVP by notching eight goals and 15 assists for 23 points in 28 postseason contests.

St. Louis wasn’t the only amazing NHL story in 2019. Tampa Bay put together a regular season for the ages, equaling the league record for victories with 62 and running away with the Presidents’ Trophy only to become the first team in NHL history to finish first in the regular season and not win a single playoff game.

Oh, and the team that knocked them out? The Columbus Blue Jackets, who won a playoff series for the first time in franchise annals.

The Bolts were so dominant during the season that Nikita Kucherov walked away with the scoring title, the Hart Trophy, the Ross Trophy and the Lindsay Award, while Andrei Vasilevskiy captured the Vezina. Kucherov’s 128 points broke Alexander Mogilny’s record for most points in a season by a Russian-born player.

The NHL playoffs featured the usual array of high-intensity, pressure-cooker games and memorable moments that included hometown hero Pat Maroon’s double-OT Game 7 game-winner to send the Blues to the Western Conference finals, a miracle third-period comeback by San Jose against Vegas thanks to a questionable five-minute penalty and a seven-game Stanley Cup Finals pitting Boston against St. Louis.

And the team dubbed a “bunch of jerks” by a jerk in his own right who would lose his job later in the year managed to upend the defending Stanley Cup champs on a first-round, Game 7 double-OT goal by Brock McGinn. The Carolina Hurricanes weaved a Cinderella tale of their own, advancing to the Eastern Conference Finals after upsetting the Washington Capitals before seeing their run ended by the Boston Bruins.

While T.J. Oshie and the Caps weren’t able to make good on their attempt to claim back-to-back NHL titles, at the collegiate level Minnesota-Duluth pulled off the feat by shutting out UMass, 3-0, for its second-straight men’s Division I crown. UMD’s title was the fourth straight championship for a non-Power Five school and the sixth in the last seven years.

Up in Canada, a few weeks before the Blues concluded their fairy-tale season, another first-time champion was crowned when the Rouyn-Noranda Huskies of the QMJHL defeated the Halifax Mooseheads to win their first Memorial Cup.

Those are just a few of the highlights from the hockey year that was 2019. There were many more memorable moments and milestone achievements – too many to write about here in detail, so for the rest of this piece I’ll let you, the hockey families of North America, connect the dots and figure out how the groups of people listed toward the bottom of this piece are connected by memorable events that took place in the hockey world in 2019.

This is not an original idea.

As a kid – and later a journalism major and sportswriter – growing up in the Washington, D.C. area, I was privileged to have The Washington Post delivered to my doorstep every day. I’m sure one of the major reasons I chose to pursue sports journalism was the influence of great Post sportswriters such as Thomas Boswell, Ken Denlinger, Michael Wilbon, David Aldridge, Sally Jenkins, Dave Sheinin, Leonard Shapiro, Dave Kindred and Norman Chad.

One of my favorites – I liked him much more as a writer than an annoying TV personality – was Tony Kornheiser. Kornhesier was the prototypical sports journalist who never played the game. In fact, he may have never played any game. At all. But he brought a wit and sarcasm to sportswriting that hadn’t really been seen before and hasn’t been seen since. It’s a big reason he was tabbed to be in the booth for Monday Night Football and later went on to become a successful national radio and television personality.

Every December Kornheiser would write a holiday year-in-review column that began with a brief introduction about some event that took place during the year or with him naming his athlete or athletes of the year or something similar. From there he would proceed to wish a “Merry Christmas” to various groups of people who were connected by important or memorable events that took place in sports during that calendar year.

It was up to the reader to think back to the events of that year and figure out how the groups of people were connected. It wasn’t always easy to figure out. That was the fun of it, and like with pretty much every Kornheiser column, there was always a large dose of humor mixed in with the holiday well-wishes. It was something that I looked forward to reading and figuring out every year and something that I have grown to miss over time.

Here is an example of his 1996 “Merry Christmas” column so you can get a better understanding of what I’m talking about.

Back in 2015 when I was covering the Capitals for The Hockey Writers national blog site, I paid homage to Kornheiser with this similar blog and vowed to continue the tradition whenever I might have the proper platform to do so in the future. My apologies in advance.

So, without further ado, here is my tribute to Mr. Tony as we review the year in hockey 2019 – only this time I will wish those mentioned a more politically correct “Happy New Year.”

Sgt. Slaughter and the Iron Sheik

Laura Branigan (RIP), the city of St. Louis and the St. Louis Blues.

Laila Anderson (keep fighting) and Alex Luey (RIP – you will be missed).

And to all of you who support MYHockey Rankings and hockey at all levels around North America, we wish you a happy, safe and prosperous 2020!