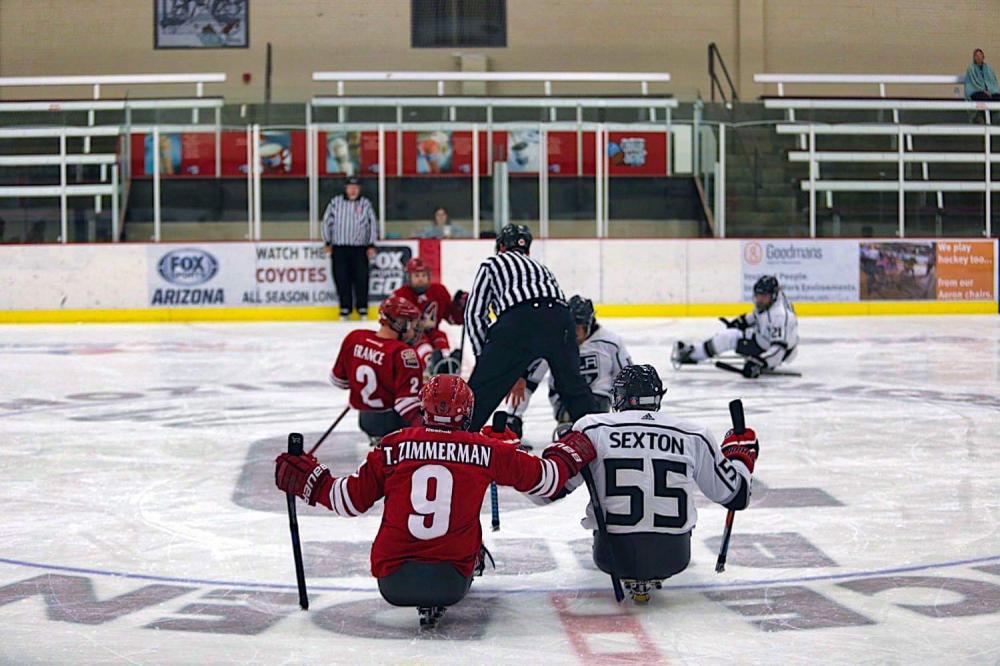 Sean Sexton is a veteran of the United States armed forces who suffered a wound to the lower part of his right leg and foot that left him 100 percent disabled during his last tour of duty in the Middle East. Stationed at what he described as a “forward operations base in an undisclosed location,” Sean’s chances of never walking again were set by doctor’s at 95 percent.

Sean credits sled hockey with changing – and possibly saving – his life, and now he wants to help introduce the sport to others who find themselves disabled and in search of something to brighten their outlook.

“My goal is to help change the lives of people with disabilities,” said Sean, who still experiences so much pain that he spends an average of 17 days each month floating in and out of consciousness. “Sled hockey has done so much for me that I just really want to give back. People with disabilities need the same outlets physically, mentally and emotionally as anyone else, and sled hockey provides those elements as well as the sense of accomplishment and belonging that we all need. I need the game. It helped me through a lot, and now I want to try my best to help somebody else out.”

Sean was introduced to sled hockey as part of a Wounded Warriors Project week-long retreat near Buffalo that was developed to help veterans cope with the effects of post-traumatic stress disorder (PTSD). Most of the trip focused on swimming and physical activities in water that are effective in helping people with physical disabilities, but because complications resulting from his injuries, any time Sean submerged he passed out.

“I really couldn’t participate and had to sit on the side and watch without going in the water, which really made the situation that much more difficult,” he recalled. “The very last day they showed us the sleds and we got out on the ice. It was the first time since my injury that I felt normal and like I didn’t have a disability. It was so incredible - just the best feeling.”

The sled hockey experience at the Project Odyssey retreat was so positive for Sean that when he returned to his Southern California home he immediately reached out to the NHL’s Los Angeles Kings to find out how he could participate in their sled hockey program. Many NHL teams around the country sponsor sled hockey teams or organizations in their areas.

The excitement that Sean felt from being active and playing a sport left him invigorated and motivated him to complete a full 26-mile marathon using his knee scooter.

“After my injury I went into major depression,” he said. “Being introduced to hockey really encouraged me and helped me see that there were options out there for people with disabilities to pursue and figure out.”

While in California, Sean estimated he spent about seven hours per week on the ice working on every aspect of his game with the goal one day earning a spot on the United States Paralympic team.

“That’s my dream,” he said. “I have two daughters and want them to see that no matter what happens in life, there’s so much you can accomplish if you are able to persevere and willing to work hard. I want to make the Paralympic team to show them that even though I’m injured, I’m not done and am capable of doing great things.”

Sean’s condition worsened while he was in California, forcing him to move to Idaho, where he could be closer to family in case he requires an amputation. His wife Michelle will need to continue working, which means family support and assistance will be essential as he recovers and continues to cope with the lasting effects of his injuries while also serving as a stay-at-home dad for his daughters Kaylee (16) and Jamie (2).

The need to be closer to family unfortunately has pulled Sean away from the sport he loves, as there is no sled hockey program in Idaho. So while he continues to skate and train as much as he can at a local ice rink, there are no organized sled hockey programs in the area.

To fuel his passion and give back by introducing others with disabilities to the sport that has provided him with so much, Sean hopes to first start a team in Boise followed by a four-team, state-wide league and then youth programs.

As with any start-up project, Sean faces obstacles such as a lack of funding for ice time and sleds and an overall shortage of equipment. He figures that $35,000 would help him to completely outfit his first team and purchase ice time for practice and games.

Sean has two sleds of his own that he can use for one-one-one lessons – and a local rink has six more sleds – so eight players can skate and play together at a time. Fifteen full sets of equipment are needed to outfit a team. Sled hockey players wear pretty much the same equipment that a stand-up player wears, and they even use skates with the blades removed to protect their feet from pucks, sticks and the boards.

To help Sean get started, MYHockey Rankings is making a donation of $1,500 to support sled hockey in Idaho and will be coordinating an online and social-media equipment drive to help offset some of his costs and outfit as many players as possible.

No family gives back the way the hockey family does, and we’ve seen the North American hockey community rally on numerous occasions to support fellow members of the hockey family who are in need. In keeping with the spirit of the holiday season, we ask that you consider donating any gently used hockey equipment you might have of any size – youth and adult –to help Sean outfit players in his program as well as those who may want to try sled hockey for the first time.

Thank you for your continued support and happy holidays to everyone!