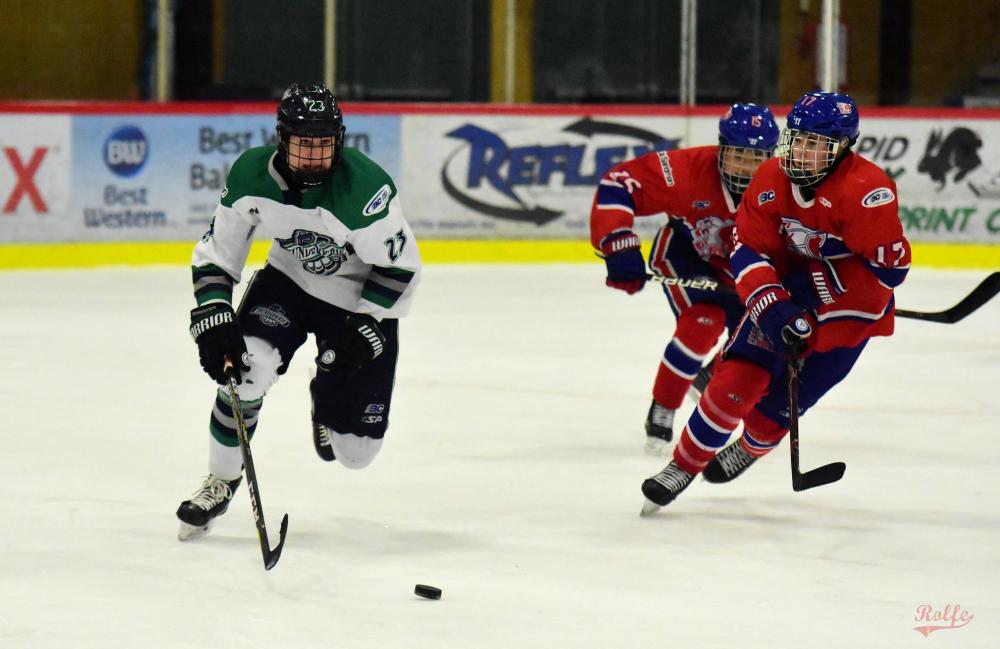 Week 12 MYHockeyRankings Games of the Week

Here are your Week 12 top matchups:

It’s a big game in the GTHL when these two Ontario powers get together Saturday. The Marlboros enter the weekend with a 24-3-5 overall record and ranked seventh in all of Canada. The Canadiens are 26-11-6 and ranked ninth nationally. These two teams played to a scoreless tie back on Oct 25. In GTHL play, the Marlboros are in first place at 14-2-4 with 32 points, five points ahead of the Canadiens, who are 12-3-3 and have two games in hand. The Marlboros have won six of their last 7 contests and 10 of their last 12, but they did drop their most recent outing, 5-1, against the No. 5 Mississauga Reps. A recent six-game winning streak included victories over the seventh-ranked Vaughan Kings and the No. 11 Markham majors. The Marlboros also beat No. 6 Myers Automotive, 3-0, Nov. 3 right before dropping a 3-1 decision to USA No. 5 Mid-Fairfield. They beat USA No. 10 New Jersey Colonials Nov. 2 as well as the 15th and 19th-ranked U.S. teams that day and Nov. 1. The Canadiens also dropped their most recent outing, 3-2, to Ontario No. 33 Don Mills Flyers after downing the seventh-ranked Vaughan Kings Nov. 30. They are 2-3-1 in their last six and 6-6-1 in their last 13 outings. That stretch includes a 3-0 victory over USA No. 11 Florida Alliance, a 5-3 loss to Ontario No. 2 Toronto Titans, a 5-2 loss to Ontario’s 11th-ranked Markham Majors and close losses to USA Nos. 2, 5 and 7.

The third-ranked Lions are unbeaten in 17 games this season and bring a 14-0-3 mark into the game against No. 4 Team Illinois. Los Angeles opened its season with a 2-2 tie against the No. 21 Anaheim Lady Ducks four times by a combined score of 21-4. They have recorded wins against the No. 4 Massachusetts Spitfires and No. 7 East Coast Wizards by identical 7-1 margins. Team Illinois is 16-9-5 and is unbeaten in its last seven (6-0-1). TI swept the No. 15 St. Louis Lady Blues in two games last weekend by a combined 9-1 score. Illinois opened the season with a 6-4 loss to the top-ranked Chicago Mission before going 5-0-1 in its next six outings. They went 3-0-1 vs. No.12 Honeybaked during that stretch and beat the Lady Blues, 4-0. TI recorded a 3-3 tie vs. Canada’s No. 5 Markham-Stouffville Stars and lost to USA No. 5 Little Caesar’s, 4-3, Nov. 8. Canada’s third-ranked Whitby Wolves also handed TI a 6-1 setback Nov. 9.

A border battle in Ontario between two of the top programs in North America as Pens Elite travels north looking to build on its five-game winning streak. Pittsburgh last lost to Canada No. 5 Durham West Lightning, 4-1, Nov. 10. That game was part of a tournament in which Pens Elite took on Canada’s 10th, ninth, fifth, fourth, second and first-ranked teams and posted a 0-4-1 mark. Pittsburgh faced the Devilettes in that event and dropped a 6-3 decision. Pens Elite has faced both the U.S. and Canadian No. 1 teams, falling to the East Coast Wizards, 5-1, Oct. 13 and the North York Storm, 5-0, Sept. 22. London is a sparkling 32-1-1 overall and brings and 8-game unbeaten streak into the weekend. The Devilettes’ only loss during that streak was a 1-0 setback vs. Canada’s fourth-ranked Stoney Creek Sabres Nov. 8. They also tied the No. 25 Bluewater Hens, 0-0, Nov. 14. Earlier in the year London knocked off Canada’s No. 9 Whitby Wolves (4-2), No. 10 Oakville Hornets (2-1) and No. 7 Barrie Sharks (6-2). The Devilettes beat USA No. 11 Chicago Young Americans and No. 12 Belle Tire by a combined score of 11-1 and also own a 3-0 victory against USA No. 4 Little Caesar’s.

It’s a big home-and-home weekend for Canada and Western Canada’s Nos. 2 and 5 teams, with the Chiefs hosting in Burnaby Saturday and the teams facing off in Abbotsford Sunday. The Chiefs are 15-4 overall and have outscored their opponents 100-54. They opened the season with a pair of 5-3 losses to the Thunderbirds, but bring a five-game winning streak into the rematches. Their last loss was a 5-3 decision against the No. 6 Vancouver NW Hawks Nov. 3, a day after they knocked off the Hawks, 4-3. Vancouver also split a pair of games with the third-ranked Cariboo Cougars back in October. Fraser Valley has won three of its last four outings, including a split against the No. 1 Okanagan Rockets (5-4 and 2-5) last weekend. They also split with No. 3 Cariboo Nov. 16 and 17 and lost two by identical 3-1 scores against Okanagan Oct. 12 and 13. Following those losses the T-Birds won six of seven and have won 9 of their last 12 to bring a 14-7 mark into this weekend’s showdowns.