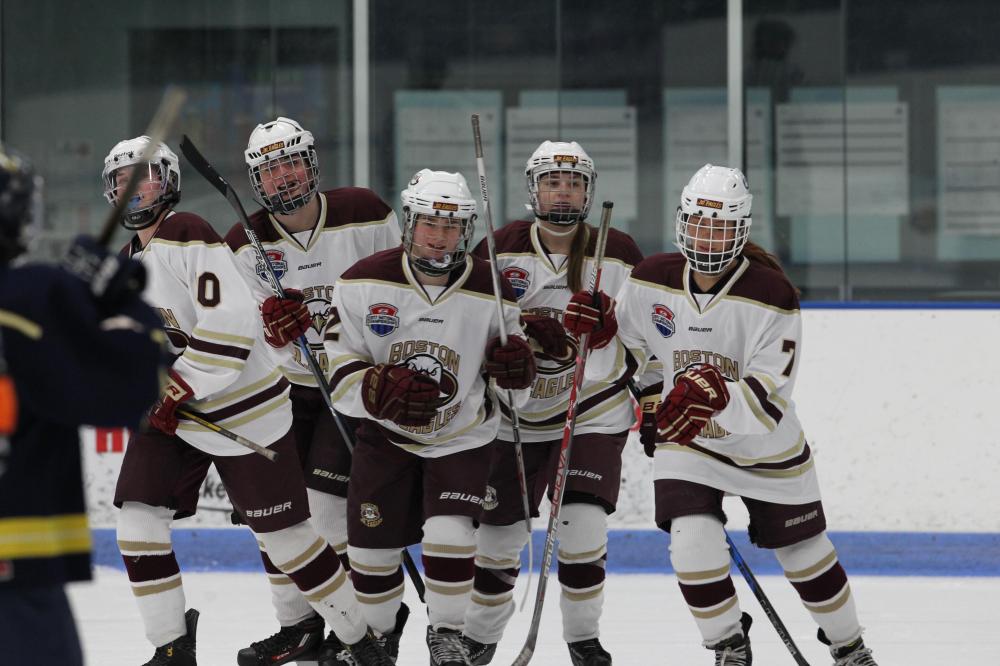 Here are your Week 8 top matchups:

The third- and fifth-ranked Canadian girls' 17U teams face each other in a Western Canada battle at Servus Credit Union Place Friday. These two teams met Nov. 5, with the Slash earing a 4-0 victory. That was Edmonton's first loss in eight games and left them with a 12-3-1 record. The Slash and Pandas also met Sept. 14 in a contest also won by Edmonton, 2-1, and Oct. 9 in a game that St. Albert captured, 1-0. St. Albert is 12-4-1 on the year. The Pandas are 11-1-1 against teams not named the Slash. Two of St. Albert's other three losses came at the hands of the No. 6 team in Canada and the United States' top-ranked Minnesota Elite Grey.

North Shore and Boston meet for the first time this year, with the third-ranked Vipers bringing a 9-3-0 mark into the contest. The Eagles are 11-3-2. North Shore has won five straight outings since a 3-2 loss to the Toronto Leaside Wildcats, the 13th-ranked Canadian team, Sept. 22. The Vipers' other two losses were to the No. 14 Canadian team and the USA's top-ranked East Coast Wizards. Boston is 1-2-2 in its last five contests, but before that had gone 10-1 to open the season. The Eagles dropped a tough 3-2 decision to the top-ranked Wizards last weekend after knocking them off, 2-1, earlier in the year.

The Mission and Wolves meet in a boder clash that should be a great one. Chicago enters the weekend with a 12-1-1 record and having outscored its opponents, 60-16. The Mission are unbeaten in eight straight since a 2-1 overtime loss to the Peterborough Ice Kats, the top-ranked team in Canada on Sept. 21. Chicago also beat the Ice Kats, 4-3, in overtime Sept. 20. Whitby is 12-4 2, unbeaten in its last four and 6-2-1 in its last nine. The Wolves have dropped two games to top-ranked Peterborough by a combined score of 3-1. Their other two losses were against Canada's fourth- and sixth-ranked teams.

A pair of Michigan foes square off in Troy Saturday as No. 6 Compuware of Detroit (17-6-2) takes on Oakland (13-8-0). This is the third meeting of the season between these two teams, with Compuware winning each of the previous matchups. Compuware took a 4-1 decision Sept. 21 an Ann Arbor, Mich., and came back with a 2-1 shootout win Oct. 7. In a game scored by Gamesheet, Jackson Truchan netted a pair of tallies for Compuware the first time around, while Cutter Gauthier handed out a pair of assists and Tyler Duke added a goal and two helpers. Nick Simo made 22 saves to pick up the win in goal. Truchan bruied the shootout winner as well in the second contest, with Bennett Barnes scoring the lone regulation marker and Simo stopping 27 shots. Compuware brings an eight-game unbeaten streak into the contest. Oakland has won four if its last five.

OHL Battle of the Border

Windsor, also ranked fifth in Ontario, takes on Compuware as part of the annual OHL Battle of the Border Showcase. Compuware brings a 13-7-1 record into the tournament, including three straight wins and four wins in the last give games. These two teams met Oct. 19, with Windsor earning a surprising 7-0 victory, but Compuware rebounded to play better in a 3-2 setback against the Spitfires the following day and will be looking for a little revenge Sunday. Compuware also lost to Ontario's No. 4 team, the Toronto Jr. Canadiens, 2-1, Oct. 5. Windsor is 21-4-1 and has won 15 of its last 16. The only Spitfire loss during that stretch was a 3-2 decision to U.S. No. 20 Little Caesar's Oct. 20. Compuware just beat Little Caesar's by the same score Nov. 2.