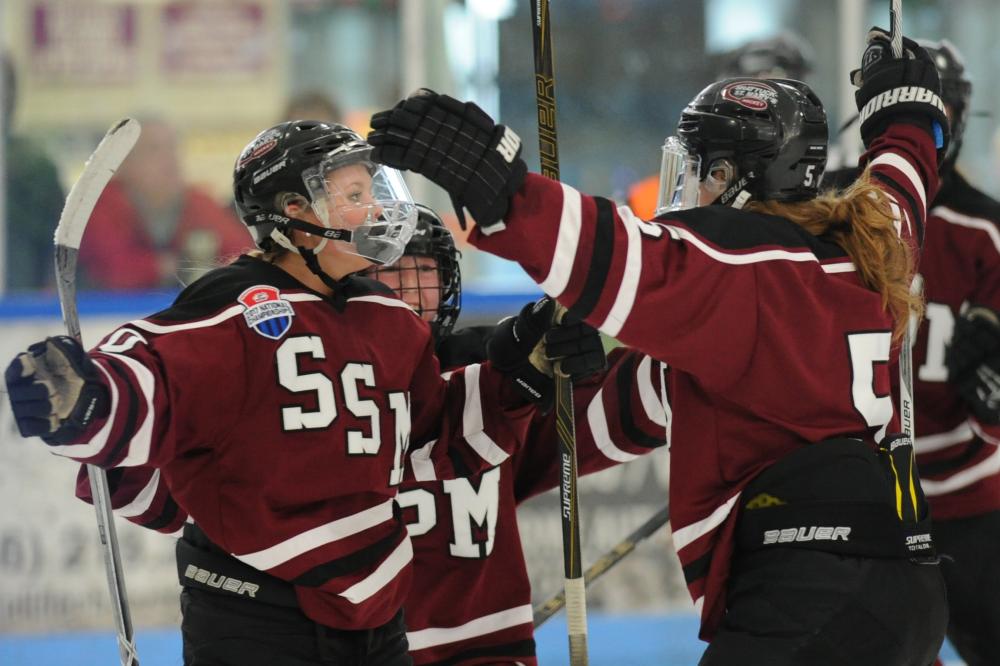 MHR Week 7 Games of the Week

Here are your Week 7 top matchups:

The No. 1 and No. 3 teams in the MHR 19U rankings face off in a three-game series at Shattuck. Shattuck enters the game with a record of 12-2-0 and has only lost to second-ranked Minnesota Elite White and fifth-ranked Minnesota Elite Black. SSM has since rebounded to beat both teams and has won seven straight contests entering the weekend.

The Mission come into the weekend series riding an 11-game unbeaten streak. Chicago has knocked off the No. 6 Bay State Breakers, No. 11 East Coast Wizards and No. 19 Honeybaked in compiling a 20-2-1 record to date. One of the mission’s two losses came against the Etobicoke Dolphins, Canada’s top-ranked 20U team.

The Rockets also are the top-ranked team in Western Canada, while Cariboo checks in at No. 5. The Cougars were previously ranked eighth nationally, but dropped to 10th despite a pair of victories against the Greater Vancouver Canadians. They enter the two-game series with a 12-2-0 record, with their only loss in the last nine outings coming against Canada’s third-ranked Vancouver Northeast Chiefs (7-4). Cariboo rebounded to beat the Chiefs, 4-1, the following day.

Okanagan has opened its season by going 15-1, with the only loss coming last week, 5-4 in overtime, against the No. 15 Vancouver Northwest Hawks. The Rockets rebounded Oct. 27 with a 3-2 victory over the Hawks. Okanagan has outscored its foes 91-32 for the season.

The Tigers jumped from No. 4 to No. 2 in the rankings after going 2-1 against strong teams last weekend. Texas beat No. 10 Michigan Elite (4-2) and Ontario’s fifth-ranked Mississauga Terriers (3-2) before falling to the No. 24 Dallas Stars Elite (3-2). The Tigers enter the weekend 18-2-0 overall and having outscored their opponents 90-28. They have won seven of their last eight games.

Geneva is 14-4-1 and has won 10 of its last 11 contests. The Cyclones went 2-1 in a three-game set against the No. 69 Chesterfield Falcons last weekend. Two of Geneva’s losses have come against the sixth-ranked Orland Park Vikings, and the Cyclones have a pair of wins over the No. 15 Chicago Jets and also beat the No. 22 Northern Express.

#11 Team Illinois 05 AAA vs. #17 Northeast Wisconsin Gamblers AAA at the Edge on Jefferson

Team Illinois comes into this Friday matinee at 16-4-2 overall and having split its last eight games after a 15-game unbeaten streak. Illinois has faced the Gamblers twice already, opening the season with a 1-1 tie and a 3-2 victory against them. They have a 2-2 tie with fifth-ranked Honeybaked and a 3-2 shootout victory against the third-ranked Boston Jr. Eagles to their credit. Illinois also beat the No. 18 Anaheim Jr. Ducks (3-0) and the No. 7 Buffalo Jr. Sabres (2-1), dropped a 4-1 decision to the No. 2 Chicago Mission and suffered a 6-2 loss to top-ranked Philadelphia Hockey Club.

Northeast Wisconsin is 11-3-3 and brings a five-game winning streak into the contest. In addition to the season-opening tie against Team Illinois, the Gamblers beat the eighth-ranked Mid-Fairfield Jr. Rangers (5-4), the 31st-ranked San Jose Jr. Sharks (7-2) and the 24th-ranked Dallas Stars Elite (4-3).

Unbeaten Omaha is 10-0-1, with the lone blemish on its record being a 2-2 tie against the No. 75 Madison Capitols last weekend. The Mavericks won three of four against Madison, however, outscoring the Capitols 17-6 in those victories. For the season Omaha has scored 76 goals while allowing just 17.

Northwest is 14-5-1 overall after going 2-2-1 in its last five. The Chargers tied the sixth-ranked Anaheim Jr. Ducks (4-4) and beat the No. 12 Chicago Bulldogs (6-2) in their most recent outings. Northwest also suffered single-goal losses to the eighth-ranked Chicago Jets and second ranked Rockford Roadrunners.