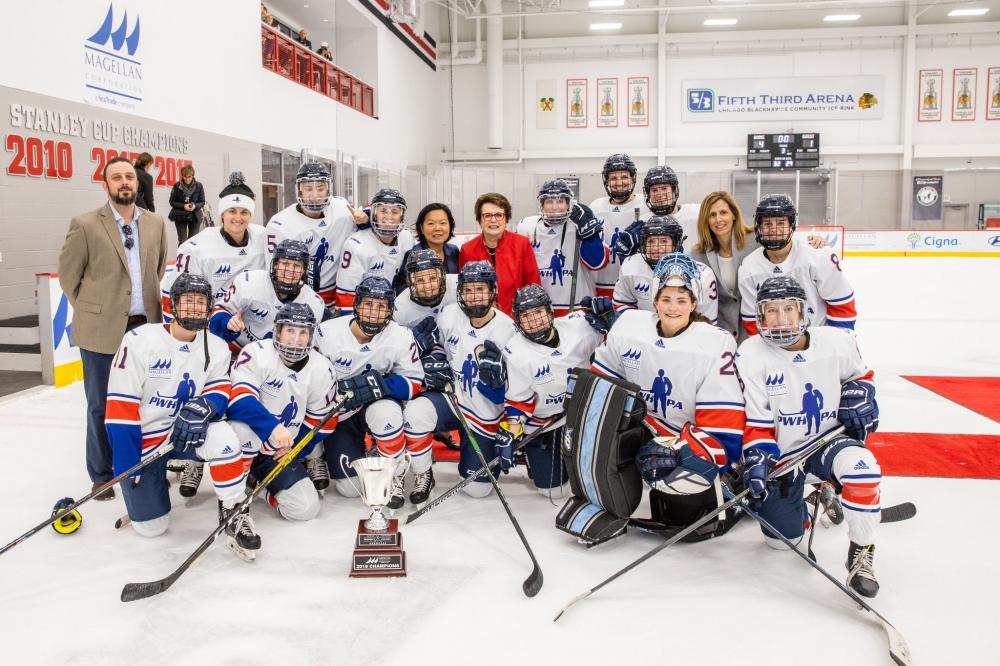 A Great Weekend for Women's Hockey

Usually when there is a professional sports exhibition featuring the top players in the world, the game isn’t that important. These contests tend to be a celebration of a particular sport and a showcasing of athletic ability where the main goal is to avoid injuries.

It’s different in women’s hockey. Any time you put together a game featuring hockey players from Canada competing against players from the United States on any stage, the game is everything.

That was the case again over the weekend during the Magellan Corporation Professional Women’s Hockey Showcase at Fifth Third Bank Ice Arena in Chicago. The weekend festival was attended by 35 former Olympians, who teamed up with other members of the recently created Professional Women’s Hockey Players Association to compete in a four-team tournament and participate in other activities to promote their cause and women’s hockey.

In this case, “the game” doesn’t just refer to the actual showcase championship game, which featured a team of American pros vs. a Canadian team coached by a pair of Hall of Famers in Cammi Granato and Jayna Hefford, respectively. This time “the Game” represented not only the weekend’s on-ice competition, but also it served as an all-encompassing metaphor to include the future of women’s professional hockey as a sustainable product in North America, the efforts of the top current professional and international women’s hockey stars on behalf of the sport and the growing number of American and Canadian girls who play hockey and dream to have same opportunities to play professionally that young boys do.

The desire among current pros to ensure that the next generation of hockey players can realistically dream of playing in a sustainable professional league is what led to the creation of the PWHPA and the Dream Gap Tour. The Canadian Women’s Hockey League (CWHL) recently folded, and the only current North American professional league – the U.S.-based National Women’s Hockey League (NWHL) – has five teams and doesn’t pay anywhere near a livable wage or provide the resources necessary to help its players fund year-round training or be able to give up their other jobs.

About 200 of the world’s top players agreed to join the PWHPA during the summer and to sit out the 2019-20 professional season. With such widespread support among the elite players, creating a series of tour events to showcase the game in different markets made sense and provided a platform for the PWHPA to spread the word about its mission and generate revenue to support the cause while allowing more young girls to see their heroes play and interact with them. Sponsors were recruited, and the Dream Gap Tour was created.

“The biggest thing for the PWHPA is that we are all united,” Brianna Decker, a United States Olympic gold-medal winner and six-time world champion, said online between periods of the championship game. “If you look at all the national team players involved, whether they are from Canada, Finland or America, we are all in it together. We know something needs to change and that we deserve better and we need something that is sustainable.”

Chicago was the tour’s third stop – following weekends in Toronto and New Hampshire – and by the time the event rolled around, there was not a ticket to be had. At Sunday’s championship game the seating area was packed, fans lined the glass all around the rink and the balconies were full of curious bodies.

The title game, like the weekend’s other contests, did not disappoint; all that is great about elite women’s hockey was on display. Superstars like Kendall Coyne-Schofield, Kelly Pannek and Dani Cameranesi of the United States - along with Canadians Jessica Eldridge, Emily Clark, Hannah Bunton and Ann-Sophie Bettez – showed off their blazing speed. The Lamoureux sisters, Amanda Kessel and Megan Keller of Team Granato showed off their skill and shooting ability as did Team Hefford’s Melodie Daoust, Marie-Philip Poulin and Sarah Nurse.

The game was intense and physical from the start, with both teams featuring a ferocious forecheck. A ton of shots were blocked, and eight penalties were whistled. There was even a 5-on-3 that led to a Team Granato goal, a little bit of head-shaking directed at the officials and amazing goaltending from Canadian Kassiday Sauve and American Katie Burt. And some of the passing among the players on these just-assembled teams made it look like they had played together for years.

A prime example was the lone goal scored by Team Hefford, a remarkable passing play that started with a dump-in by Renata Fast that was chased down by Poulin. Without hesitating, Poulin feathered a pass to a wide-open Daoust, who had snuck behind the defense and then executed a brilliant deke by walking in from down low and cutting across from Burt’s left to tie the game at 1 early in the second period. Kessel had opened the scoring for Team Granato in the first period by firing typical Kessel-family-style bullet past Sauve off a pretty feed from the right-wing boards to the high slot by Monique Lamoureux.

Team Hefford possessed the puck more than Granato’s group through the first two periods, but the Americans created numerous chances off counter-attacks and drew a pair of penalties that led to a 5-on-3 goal on a one-timer by Keller that gave them a 2-1 lead heading into the third. Burt was spectacular in goal, too, stopping 26 of the 27 shots she faced before giving way to Nicole Hensley for the final 20 minutes.

Jocelyne Lamoureux buried another one-time blazer that Haley Skarupa teed up for her with a soft pass from the right-wing half-wall to the high slot 4:19 into the third period, and Pannek pushed the final margin to 4-1 with an empty-net goal off a turnover in the final minute.

Keller and Eldridge were named their teams’ players of the game, and Team Granato was presented the Magellan Corporation Cup by Billie Jean King, whose foundation supported the showcase and the tour. King also was on hand to drop the puck for the ceremonial faceoff prior to the championship game.

“I couldn’t be more thankful for her support and the support of her foundation and all the people who were advocating so hard for us,” Decker said. “She and her partner Ilana {Klos} have done a great job of supporting us and teaching us as we go through this charge. They have been through this and experienced it, so there is no one better to help us.”

There were two preliminary games Saturday to determine who would compete for the championship, with Granato’s team knocking off a squad coached by another American Hall of Famer, Angela Ruggiero, 4-2 on the strength of Coyne-Schofield’s second hat trick of the tour. On the Canadian side, Hefford’s team defeated a team coached by Lori Dupuis, 5-4. Team Hefford overcame a 2-0 deficit with five second-period goals and then hung on to win that one. In Sunday’s consolation game, Team Ruggiero came out on top against Team Dupuis, 6-4.

While the players did everything expected and more to show off the women’s pro game on the ice, the weekend was about more than that. A big component of the PWHPA’s mission is to provide the younger generation of players with professional role models to look up to and to make the younger players aware that the current pros are doing all they can to make the game better for them and to ensure more opportunities for them in the future. Interaction and accessibility are key components of the mission.

“The Dream Gap Tour is important for us first to help get the messaging out about what we are doing,” Decker said. “Another thing it shows is that we are united together in trying to get some things that are bigger and better for us, and we also want to show the younger generation that we are working very hard to get some things that will make it better for them. We have a lot of young kids in the stands. We want to have something they can look up to and look forward to when they are our age.”

Girls under the age of 16 were encouraged to sign up for a free clinic with the pros prior to the Chicago Black Hawks game on Friday and invited to stay for the game that evening. Postgame meet-and-greet and autograph sessions with the pros were held during the showcase, and Bauer provided a “Share Your Dreams” board on which young players could sign their names and leave their hockey dreams in writing. Players also made appearances around town throughout the weekend.

In addition to Illinois-based Magellan Corp. and Bauer, Dunkin Donuts, Adidas and Budweiser came on board as some of the tour’s national-level sponsors, and live streaming was provided via YouTube and CBC in Canada. Games still can be viewed on-demand by accessing those platforms.

The tour also has been heavily promoted on social media utilizing hash tags such as #ShareYourDreams, #DreamGapTour and #ForTheGame. Those who would like to advocate for women’s professional hockey are encouraged to look for future similar events and help spread the word via social media. More information about the PWHPA on www.PWHPA.com.

“The biggest thing people can do is to put things on social media about us,” Decker said. “We need as much support as possible. Obviously there is another league that still exists, but right now we know that this is the best thing for us. So we really just need people to continue to support us and to continue show up. And thanks to all the fans who have supported us. Without them this wouldn’t exist right now.”

The ultimate goal of the PWHPA is facilitate the creation of a viable and sustainable women’s professional hockey league in North America similar to the WNBA. Right now the organization operates with the support of its sponsors and from event-generated revenue. An immediate goal is to provide financial support and other resources that will allow international- and professional-level players to train sufficiently to compete at the game’s highest levels. NHL support is being sought, and the NHL Players Association provided its backing as a “Premier Partner” in September.

“The success of women’s hockey is integral to the growth of the sport,” said NHLPA Executive Director Don Fehr in a press release. “We look forward to seeing these talented hockey players on the ice as they demonstrate their skill and passion for the game throughout the PWHPA’s Dream Gap Tour.”

Added Decker: “I know all the hard work will pay off eventually. Hopefully it will happen sooner rather than later and we will have something more sustainable to play in.”