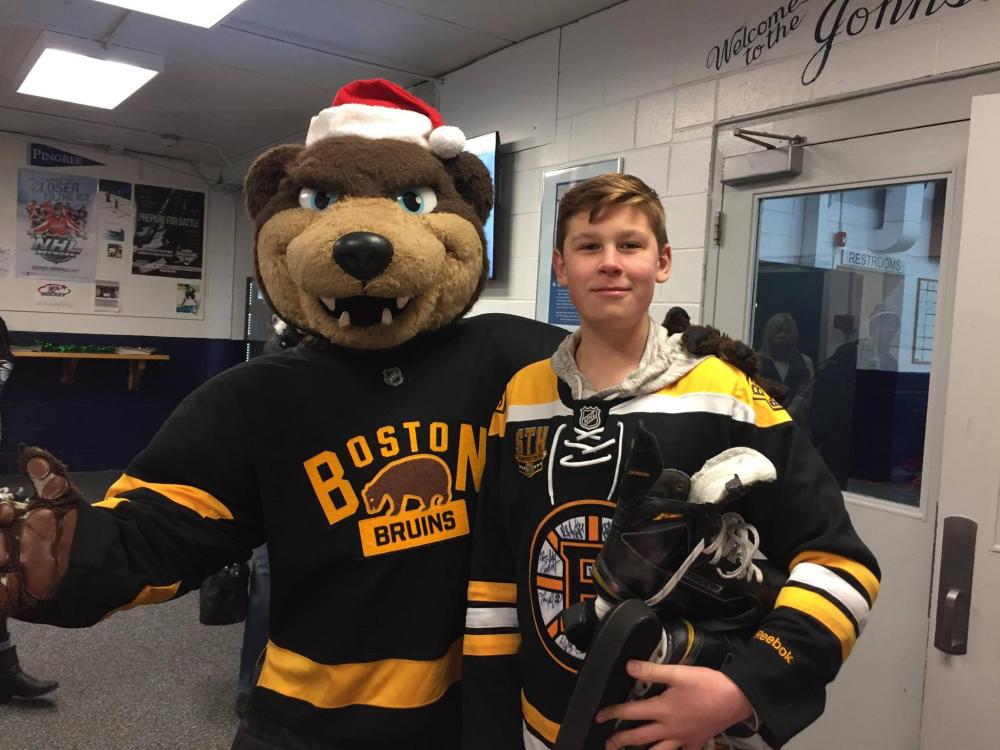 It’s not unusual for someone to have a life-altering experience at some point. For many of us, this happens later in life and causes us to reflect on our lives while perhaps energizing us to want to give back or make a difference in the lives of others.

For Griffin Bouchard, that experience occurred when he was 11 years old. And he’s been making a difference ever since.

Now a 16-year-old forward for the New Hampshire Avalanche 16U full-season team and a junior at Hamilton Wenham Regional High School in Hamilton, Mass., Griffin has spent the last five years raising more than $30,000 for the Boston Children’s Hospital Concussion Research/Brain Trauma Center. This year he hopes to raise an additional $5,000 through a 3-on-3 youth hockey tournament in November.

“I love the idea of the 3-on-3 as a player, because it allows you to be creative and have a lot of fun,” he said. “My goal for the tournament is to provide a fun, competitive atmosphere where kids can compete for first place.”

The tournament is scheduled for Nov. 11 at the Essex Sports Center in Middleton, Mass. It will run from 9 a.m. until 3 p.m. in conjunction with Chris Nagy and C.N. Hockey. “Chris Nagy has been very generous with the ice time,” Griffin said.

There will be a four-game guarantee for each team with a championship in each division – squirt, pee wee, bantam and possibly 16U. Games will be 25-minutes running time, with two being played at the same time. The entry fee is $500 per team.

TSR Hockey is serving as one of the event sponsors, and Boston Bruins singer Todd Angilly will sing the National Anthem. The Bruins’ mascot will be in attendance, and Griffin hopes to have a CCM shooting area for spectators and teams waiting to play. In addition, prizes will be raffled off throughout the day, including an open haddock fishing trip with the crew of Dave Marciano’s Boat from the reality television show Wicked Tuna.

Bruins legend Rick Middleton also will be on hand signing autographs. Middleton and the Boston Bruins Foundation have been a big part of Griffin’s fundraising efforts the past five years. Griffin contacted the Bruins Alumni about his original fundraising idea, a holiday skate at the Pingree School ice rink, and Middleton has volunteered to attend the event ever since.

“Having people who have accomplished my dream of playing in the NHL involved has meant a lot to me,” Griffin said. “Rick Middleton is so nice and has always been supportive of me. I would have never thought that any alumni would have helped me and been so supportive of my fundraising, so having the help and support of the alumni is amazing. I don’t think people realize how much Rick and the other alumni travel to help raise money for great causes. They are selfless people who really take time out of their busy schedules to help others.”

Through his relationship with the Bruins Foundation and NHL Alumni, Griffin also has been a top-10 fundraiser for the Corey C. Griffin NHL Pro-Am, an event that has raised more than $2.5 million to support the care and research of pediatric head trauma at Boston Children’s Hospital, the past two years. Griffin raised more than $10,000 for the most recent event.

“Griffin got involved at a young age and seems to look forward to raising more money each and every year,” Bob Sweeney, Director of Development for the Boston Bruins Foundation, said. “It’s great to see someone at a young age think about giving back and making a difference in the community.”

Griffin added: “I have continued because of how much money I have raised. It drives me to work even harder to raise more than I did the year before.”

Griffin’s drive to give back started after the thing he loves most, hockey, was taken away from him for a year when he was 11. That’s when he learned that he had coalitions in both feet. Coalitions are abnormal connections that develop between two bones in the back of the foot, the tarsal bones. This connection can be comprised of bone, cartilage or fibrous tissue and may lead to limited motion or pain.

He had surgery on both feet at Boston Children's Hospital and was in a wheelchair and on crutches for almost six months. The recovery and rehab kept him off the ice for an entire season.

“I hysterically cried,” he recalled, thinking back to when he learned that his feet would require surgery. “My mom wanted me to get in a cast right before the summer league playoffs, but I convinced her to let me play in the quarterfinals. That season was terrible. I went to one practice and left after 10 minutes. I couldn’t watch anymore without getting upset.”

Coming back after taking a year off from hockey was challenging and exciting at the same time. The same drive and determination that has made him such an effective fundraiser served Griffin well in his rehabilitation.

“My first practice back was tough,” he said. “My legs felt like jello, and I got winded really quickly. I went to a physical therapist about two or three days each week. He helped me get my legs back and helped a lot with getting my endurance up to where it was before. I hated going to the physical therapist because of how hard he pushed me. Getting back into hockey shape felt like it was taking forever, but before I knew it I was back on the ice. It was great to be back. I think I scored in my first game, so that helped build my confidence a bit.”

While his condition took hockey away from him for a year, spending so much time at the hospital opened Griffin’s eyes to the plight of others and the level of care provided by the hospital staff.

“He gained an appreciation of what kids in the hospital go through,” said Lori Bouchard, Griffin’s mother, “and a perspective on how lucky he was to be playing hockey.”

That realization helped Griffin come up with the idea to host his holiday skate to benefit the hospital as a sixth grader when his teacher Danielle Petrucci led a life skills class and challenged her students to perform a service-learning project,

“I always knew concussions were an issue, but I didn’t know how serious or how many people are really affected by them {before being in the hospital},” Griffin said. “Hearing about all the people with permanent brain damage and other concussion-related issues made me want to help in some way.”

His first event took place five years ago. Now, after having raised more than $30,000 for the hospital, Griffin has decided to try something new with the 3-on-3 tournament.

“Last year, not as many people came to the holiday skate, so I decided to change things up,” he said. “From the start I wanted to add a hockey aspect, but we decided on a skate because it would appeal to more ages. I’m hoping that at some point current NHL players and college teams can support my fundraising. I feel that the more people who are involved, the more awareness and money I can raise.”

Like most hockey players his age, Griffin’s dream is to play NCAA Division I college hockey and then move on to the NHL. If the drive and determination he has shown on and off the ice since coming back from his surgery are any indication, that goal just might be within his reach.

“I’ve skated him for about 10 years,” said Mark Mowers, his longtime skating coach. “He is a passionate hockey player with a big heart, which is self-explanatory with all the charity work that he has done at a young age."

Anyone interested in participating in the 3-on-3 tournament or making a donation can contact Lori Bouchard at (978) 395-1401 or loribouchard71@gmail.com. The registration cutoff date is Oct. 1.