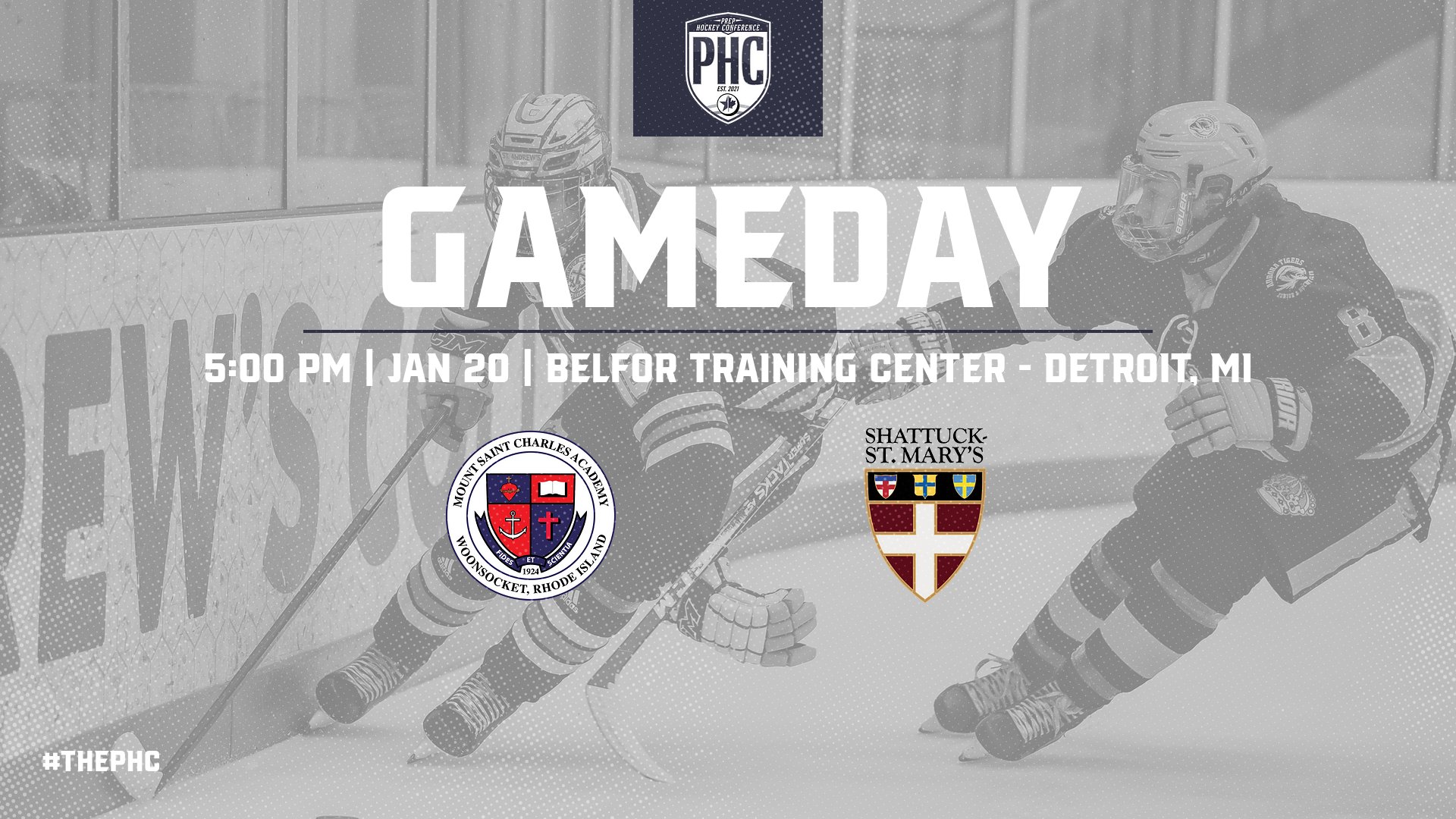 For our Week 17 MYHockey Rankings/LiveBarn Games of the Week we provided a mix of tournament and league contests. Our marquee matchup was a showdown between the top-two USA Boys 18U Tier 1 teams as the Prep Hockey Conference returned to league play in Detroit. We also highlighted matchups of highly ranked 19U and 16U USA Tier 1 Girls teams at the Jr. Flyers Showcase outside of Philadelphia as well as a showdown between 18U Ontario Boys top-18 clubs from the Steve Richey Memorial Tournament of Champions in Peterborough.

This weekend’s Prep Hockey Conference (PHC) league slate at the Belfor Training Center in Detroit included top-ranked, school-affiliated prep and 18U teams from the U.S. and Canada. Here is a summary of how the competing teams did along with their Week 16 national rankings and season/league records:

Our highlighted PHC game of the weekend was Friday’s USA Tier 1 No. 1 vs. No. 2 tilt between Shattuck and Mount St. Charles, but the weekend in Detroit was chock full of great matchups, including a 2 vs. 3 showdown between Mount St. Charles and Culver and a huge border-battle between MSC and St. Andrew’s. CLICK HERE for the full weekend schedule.

Finally, we went north of the border for the Steve Richey Memorial Tournament of Champions in Peterborough, Ontario, a tournament that featured seven of Ontario’s top-26 18U AAA Boys teams and 10 of the province’s top-27 16U clubs. Our featured game from Peterborough was an 18U matchup Saturday morning between the No. 12 Soo Jr. Greyhounds and the No. 18 Toronto Titans.

Eight different players scored in this one as Shattuck blew open a tight 2-1 game with three second-period goals before holding off a two-goal Mount St. Charles rally in the final frame. Aidan Park, Daniel Shlaine, William Zellers, Shaun Rios and Ian Spencer each tallied for SSM, with both Zach Nehring and Cooper Pierson contributing a pair of assists and Liam Beerman making 24 saves to earn the victory in goal. Patrick Murphy, Samuel Carosello and Chase Pirtle netted goals for Mount St. Charles, while Noah Mertz recorded a pair of assists. Surprisingly, MSC was unable to muster a win during the weekend, going 0-3 with additional losses against USA Tier 1 No. 3 Culver Academy (2-1) and Canada Independent Prep No. 2 St. Andrew’s College (8-5). Shattuck posted a perfect 3-0 mark or the weekend, also knocking of South Kent School, 6-2, and Northwood School, 5-3. Both teams remained in first place in their respective PHC divisions. Shattuck’s Hunter Anderson and Park rank first and second in league scoring with 18 and 17 points, respectively. Nehring is tied for third at 16. Pirtle is MSC’s top scorer with 14 points to rank sixth in the league.

The second-ranked BK Selects took this one by a surprisingly large margin as part of a 2-0-1 weekend that included a 1-0 victory over No. 13 Northwood School and a 1-1 tie vs. No. 10 North American Hockey Academy. They are now 35-6-5 on the year and have outscored their opponents, 158-42. The No. 5 Jr. Flyers ended the weekend 1-1-1 thanks to a 4-0 win vs. NAHA and a 2-2 tie against Northwood. They concluded the showcase at 42-11-2 and holding an overall scoring advantage of 200-73 vs. their foes. In our featured matchup, Bishop Kearney scored twice in the first period and three times in the second to secure the win. Finley McCarthy, Angelina Digirolamo and Naomi Tink also scored for the Selects, and Michaela Hesova turned aside all 23 Jr. Flyer shots she faced to earn the win in goal.

Two top-27 USA Girls Tier 1 16U teams faced off Saturday at the Jr. Flyers Showcase outside of Philadelphia. NAHA brought a 19-20-4 record to the showcase, while Rome was 30-24-7 and had outscored its opponents, 134-122. These two teams met Nov. 19, with NAHA skating to a 3-1 victory, but Rome took the rematch, 3-2 in overtime, Jan. 8. The Grizzlies would win again Saturday, 2-1, but NAHA would not go down without a fight. Meghan Crowley and Seina Spadone scored in the first two periods to stake Rome to a 2-0 lead, but Annie Gallagher’s power-play marker late in the third period cut the margin to one. The Grizzlies held on for the victory thanks to the goaltending of Sydney Canham, who turned aside 16 of the 17 shots she faced. Tanith Plachetka made 28 saves for the Hawks in suffering the loss. Rome went 1-2 at the showcase before heading to New Jersey to knock off the No. 42 N.J. Colonials, 5-1, in their fourth game of the weekend. The Grizzlies lost to No. 11 Bishop Kearney, 2-0, and the No. 18 Jr. Flyers, 1-0. They are now 29-22-2 on the year. NAHA also was 1-2 at the showcase, falling to the Jr. Flyers, 2-0, and beating Bishop Kearney, 2-0, to conclude the weekend with a 20-22-4 record.

One of the top pool-play matchups of the Steve Richey Tournament featured the No. 12 Greyhounds taking on the No. 18 Titans in Peterborough. Soo had a 26-9-5 record and held a 143-76 scoring advantage against its opponents entering the weekend. The Greyhounds had won eight of their previous 10 contests and were 11-3-1 in their previous 14 before going 3-1 at the tournament, including a 5-1 victory over the Titans in this game. The Titans were 6-2-0 in their previous eight outings and 12-5-0 in their previous 17 before going 2-1-1 on the weekend. Soo is now 28-9-5 on the year, while Toronto is 25-14-5. In this game, Soo broke open an what had been an evenly played game with a pair of goals in the final 3:03 of the first period then proceeded to score the next three before the Titans responded with a tally by Julian Mandarino with 2:49 left in the game. Cole Cond and Hudson Chitaroni each scored twice for the Greyounds, with Declan Gallivan contributing the other Soo goal. Devin Jones-McDonald dished out three assists for the Greyhounds and Callum McCauley handed out a pair of helpers to make a winner out of goaltender Maverick Fletcher.