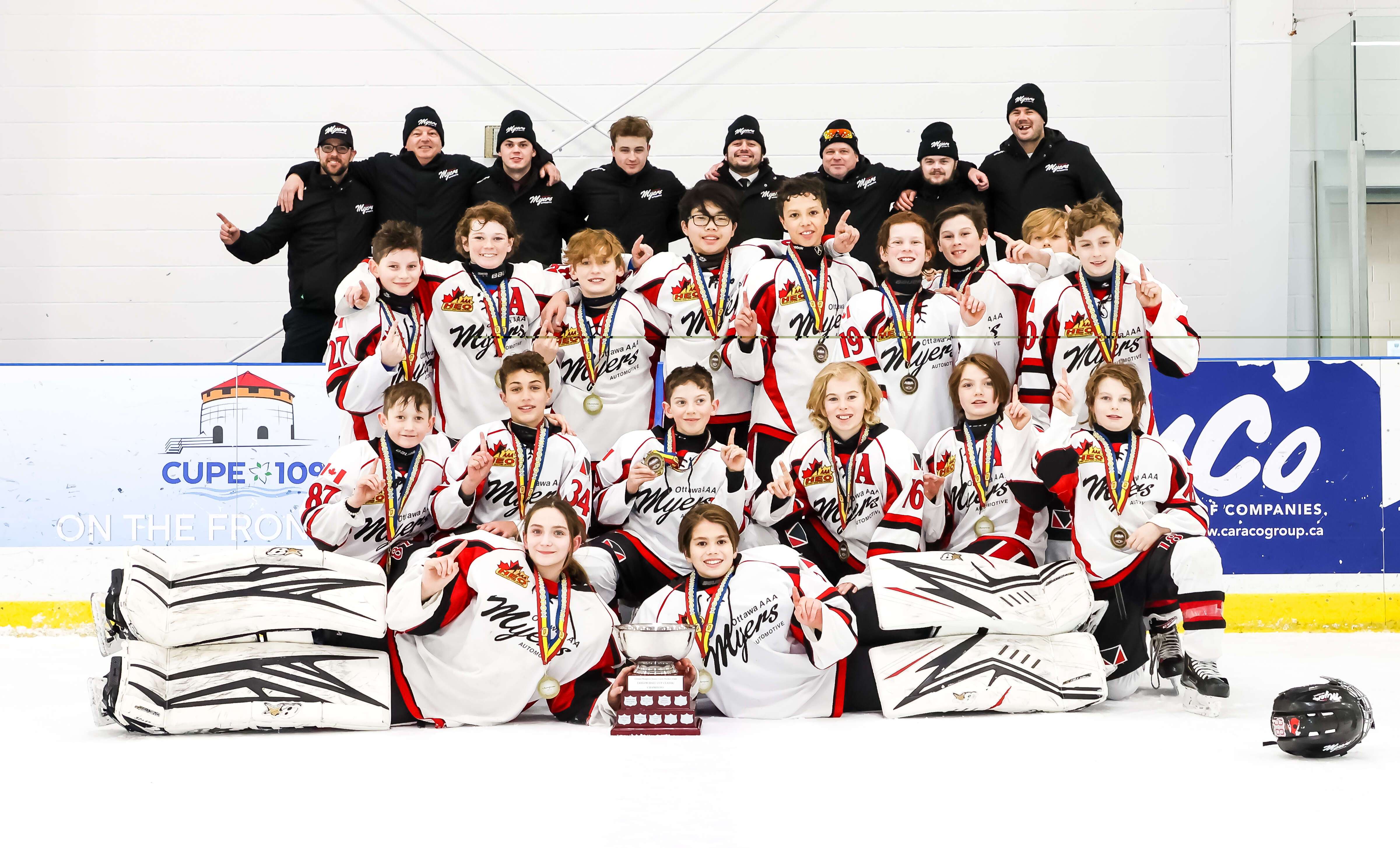 Martin Luther King Day Weekend has become one of the great hockey weekends on the calendar every season. We love finding out where everyone played and how they did and seeing the flood of team photos from various exciting locations around North America. Keep the photos coming and we will keep re-posting them to the best of our ability.

To get an idea of the scope the MLK Weekend tournament activity, our partners at MYHockey Tournaments alone hosted more than 850 teams that played in nearly 1,900 tournament games in 16 different United States cities. And that’s just the tip of the iceberg.

For our Week 16 MHR/LiveBarn Games of the Week, we found some great matchups from both sides of the border.

The Mid-Atlantic Showcase Series continued last weekend outside of Philadelphia in Hatfield, Pa., welcoming many of the top 14U and 16U Tier 2 boys’ teams in the U.S., as well as a top-10 14U AA team from Ontario, for its Winter Showcase. Two of our featured Week 16 contests came from that tourney, while we also headed north for the Kingston Jr. Gaels Taylor Hall Invitational Classic, which included some of Ontario’s top U10, U11, U12 and U13 AAA teams. Our final highlighted event was the North American Prospects Hockey League Showcase in Michigan, which included NAPHL Tier 1 Division teams competing at the 16U and 18U levels.

Last weekend, 20 teams in the 14U and 16U AA boys’ categories competed in the Mid-Atlantic Showcase Series Winter Showcase in Hatfield, Pa. The 16U division was stacked and included the Nos. 2, 3, 6, 7, 10, 12, 19, 20, 50 and 56 Tier 2 teams in the United States. Meanwhile, the 14U division boasted four USA top-25 teams as well as Ontario’s No. 8 London Jr. Knights. Every team was guaranteed five games, and the top-two teams through four games met for the championship in each age bracket.

The Taylor Hall Invitational Classic featured a total of 38 teams competing across the four age groups. We highlighted a matchup of top-15 Ontario U12 Boys AAA teams. The U12 division included five of Ontario’s top-25 clubs. Congratulations to No. 15 Myers Automotive AAA for capturing the championship, 1-0, over the 10th-ranked Upper Canada Cyclones in a rematch of our Game of the Week from the preliminary round.

The NAPHL Showcase in Ann Arbor Michigan allowed 16U and 18U Tier 1 players to compete at USA Hockey Arena and other venues in front of scouts from its parent organization, the North American Hockey League. The NAHL is the only USA Hockey-sanctioned Tier 2 tuition-free junior league in the United States and is one of the top producers of NCAA Division I hockey players in North America.

Our featured game from the NAPHL Showcase included a pair of top-13 USA Boys 18U Tier 1 teams, both of whom had yet to drop a league game in regulation entering the weekend and were looking to move closer to the top of the standing. No. 12 CarShield entered the event with a 7-0-0-1 record in NAPHL play (shootout loss), while the No. 13 Esmark Stars were 8-0-0-0. Both teams had 22 standings points, which left them nine points behind the league-leading Philadelphia Little Flyers, but they had played four fewer games than Philly. CarShield was the winner of our NAPHL Game of the Week by a 3-1 tally. CarShield finds itself in third place after a very strong showing at the Showcase with a league record of 10-1-0-1.

Littleton plays in the Central States Developmental Hockey League, one of the top Tier 2 circuits in the United States, and the Hawks brought a 37-5-2 record into last weekend’s Mid-Atlantic Winter Showcase. They held up their end of the bargain, capturing the tournament title with a perfect 5-0-0 record while outscoring their opponents, 23-9, to move up to No. 2 in this week’s rankings. Atlanta went 3-2-0 at the tournament, dropping to ninth in the rankings. In this game, Littleton broke open a 2-2 contest with four unanswered third-period goals. Zachary Palik netted his second of the game during the third-period outburst, with Curren Stukey, Jack Beveridge and Bennet Engle also scoring. Max Neumayr scored the other Littleton goal, while Chamberlain Nocera made 27 saves to earn the win in goal. Tommy Payne and Aidan Ennis scored for Atlanta.

North Jersey used this 2-0 victory over London to propel itself all the way to the tournament championship game, where the Avalanche dropped a 2-0 decision to the No. 31 Long Island Arrows. The Avs’ showing pushed them to No. 17 in this week’s rankings, while the Arrows moved up five spots to No. 26. North Jersey wound up the tournament with a 3-2-0 record and is now 42-9-0 overall. Long Island is 37-9-2 after going 4-0-1 en route to the title. London was 1-3-1 at the showcase, leaving its overall record at 21-10-4. The Knights dropped to No. 11 in the Ontario rankings. In our Game of the Week, the Avs appear to have scored two third-period goals to break a scoreless tie and skate away with the win. No other details are available at the time this was written.

A pair of top-15 Ontario U12 AAA teams clashed in pool play at the Taylor Hall Invitational in Kingston. These two teams had met six times previously, with Myers holding a 3-2-1 advantage and a scoring edge of 23-20 in those contests, entering the weekend. They would twice more at the tournament as both teams advanced to the championship game. Myers would with both times, capturing the tourney title with a 1-0 victory in the finals after skating to a 3-1 victory in the prelims. Despite dropping the championship game, the Cyclones jumped to No. 8 in the rankings by going 4-2-0 on the weekend, including a 2-1 overtime victory against No. 22 in the semifinals. Upper Canada is now 27-14-5 on the season. Myers moved into the No. 14 spot this week thanks to its perfect 6-0-0 showing at the tournament and is now 28-12-5.

The two highest-ranked NAPHL National Bound 18U teams squared off at last weekend’s Tier 1 NAPHL Showcase looking to make a leap forward in the league standings. Neither team had lost an NAPHL contest in regulation entering the weekend, but they were tied for sixth in standings points with 22. Esmark was 8-0-0-0 in league play, while CarShield was 7-0-0-1 with a shootout loss. All five teams above them in the standings had played either four or five more games, however, so the weekend presented a big opportunity for them. Car Shield took advantage of the situation, winning this game, 3-1, and ending the tournament in third place at 10-1-0-1 and with 31 points. They are a point behind the second-place New Jersey Titans but still trail the first-place Little Flyers, who have played four more games, by 12 points. Esmark went 1-3-0-0 at the tournament and fell to ninth place with a 9-3-0-0 record and 24 points. Overall, for the season, CarShield holds onto the No. 12 spot in the rankings with a record of 31-11-0. Esmark is now 32-11-2 and falls all the way to No. 19. In this contest, CarShield was in control throughout, skating to a 3-0 lead after two periods on goals from Nick Puricelli, Connor Broadhead and Alex Cameron. Broadhead added an assist on Puricelli’s first-period marker. Brody Simko netted the lone Esmark goal in the final frame. Brady Govero stopped 19 of the 20 shots he faced to earn the victory in goal for CarShield.